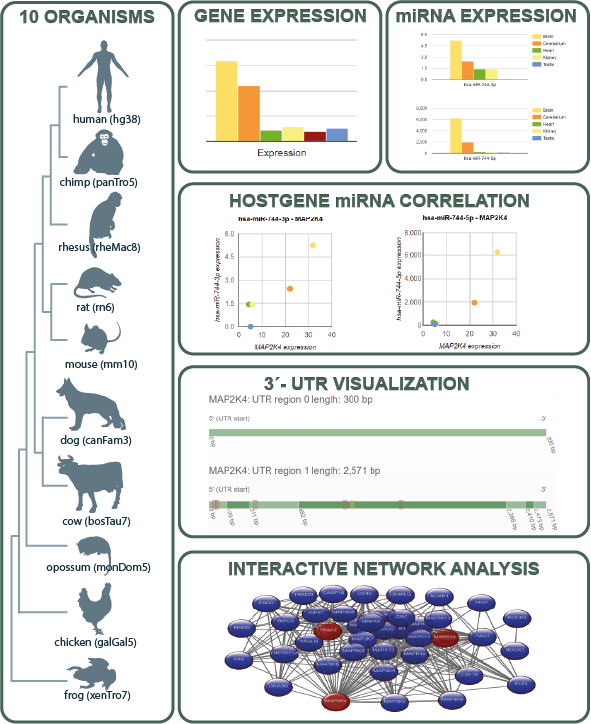 miRIAD in its newest version was designed to support miRNA research, especially when investigating intragenic miRNAs, i.e. miRNAs who are co-localized with protein-coding genes.


Multiple species: The integration of miRNA, mRNA, and poly(A) sequencing data for multiple species allows the investigation of miRNA - host gene and miRNA - target gene interactions on an evolutionary level. For example, MCM7 contains three oncoMirs (miR-106b, miR-93, miR-25). Interestingly, miR-93-3p correlates positively with its host gene expression in rhesus and mouse, but has a significant negative correlation across tissue expression in human.

Host gene miRNA correlation: The correlation of the expression of host gene and intragenic miRNA across multiple tissues is important to assess when looking for coregulated transcripts. It also may indicate direct negative feedback, in case host gene and miRNA correlate negatively, as might be the case for MCM7 and its intronic miRNA miR-25 and miR-93.

3' UTR visualization: miRIAD now displays a novel and interactive representation of the 3' UTR of protein coding genes. It shows alternative polyadenylation sites, lets the user display potential miRNA target interactions and visualize different UTR isoform expression across tissues. For example, human ZFR is targeted by its intronic miRNA miR-579. However, there are multiple UTR isoforms, suggesting that in brain, for example, about 50% of transcripts might be subject to a direct negative feedback.

Interactive network analysis: In many cases, researchers are interested in a set of genes rather than a single molecule. The identification of miRNAs with relevant impact on this gene set is often times challenging. Therefore, miRIAD allows to visualize the relationship between the genes to localize the hubs in this network. It will also calculate a network target enrichment score to identify miRNAs that target more genes than expected within the network. For example, the following gene signature known to be relevant for colorectal cancer prognosis NOTCH2, ITPRIP, FRMD6, GFRA4, OSBPL9,CPXCR1, SORCS2, PDC, C12orf66, SLC38A9, OR10H5, TRIP13, MRPL52, DUSP21, BRCA1, ELTD1, SPG7, LASS6, DUOX2 [1] identifies miR-150 as an interesting target that indeed has been published to be a protective against colorectal cancer [2].

microRNAs (miRNAs) are short (~22 nt) non-coding RNAs that play key regulatory roles in a variety of cellular processes by coordinating gene expression. miRNAs may be located in intergenic regions ("intergenic miRNAs") or mapped to intragenic loci of protein coding genes (namely "host genes"). Around 50% of the mammalian miRNAs reside within introns of protein coding genes [3-6]. Most of human miRNAS (%) are of the same orientation as their host genes. As a consequence, increasing evidence has shown that intronic miRNAs may be co-transcribed with their host genes [4, 7, 8], leading to important functional implications for particular regulatory gene networks.

miRIAD is a web search tool developed with the primary purpose of integrating relevant information concerning intragenic miRNAs and their host genes. Taking into account that the relationship between the expression of a gene and its intragenic miRNA may represent an important component in the study of specific regulatory pathways, we aim to make miRIAD a useful tool for researchers working in the field.

How do I search for my gene or microRNA of interest?

We have implemented a flexible search engine that allows users to search for reference annotated genes and miRNAs annotated in miRBase. Important notes on searching are outlined below:

What do the individual elements in the gene representation view mean?

The miRIAD webtool presents genes as depicted below. The first gene representation is a summarized representation, based on annotated regions of the individual RefSeq transcripts shown below, followed by intragenic miRNAs (darkblue = host gene has seed site for its intragenic miRNA). A separate figure below represents all 3´ untranslated regions including alternative polyadenylation sites, APA motifs, miRNA binding sites, and sites of high similarity to the full miRNA sequence.

What can I do with the network view?

Many times, one is not interested in a specific interaction between a miRNA and a target, but in the impact of a miRNA on a network. For example, if the result of an experiment yields ten genes that are differentially regulated, it is useful to show the relationship between those genes. Therefore, as depicted in the graphic representation below, miRIAD allows to visualize potential interactions between members of the network (regular blue nodes). Interactions can be filtered by score or data source. If the network contains host genes (red nodes), one can also visualize, which genes within this network are potential targets of the respective intragenic miRNA. Additionally, all miRNAs will be scanned for seed site over- or underrepresentation within the network. You can load the example shown below here. 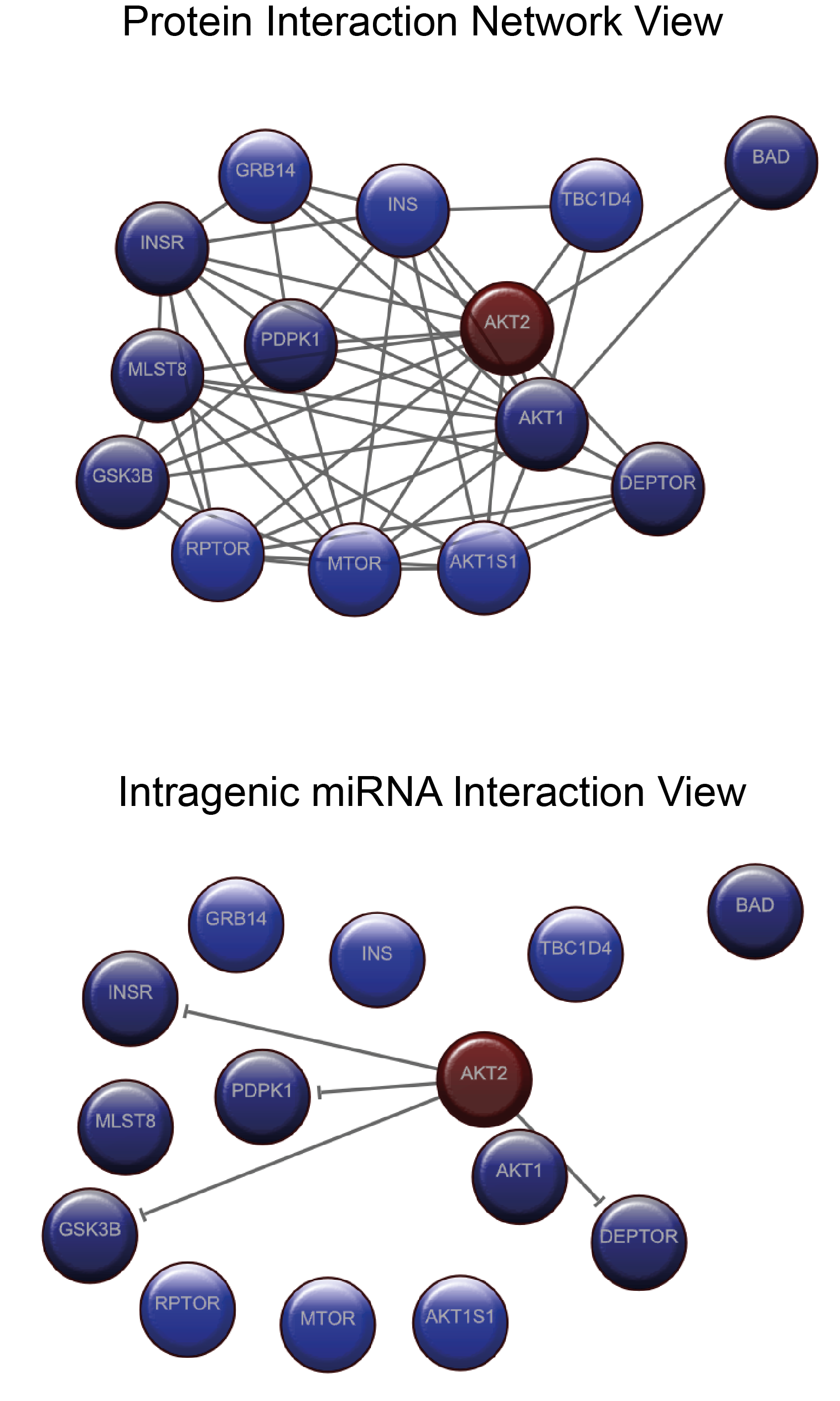 What is the source of the data?

The miRIAD database references annotated genes from human genome (hg38) and miRNAs annotated from miRBase (version 21). The mapping of intragenic miRNAs was performed according to Hinske et al. 2010.

The protein-protein interaction dataset was downloaded from HPRD

miRNA target information is seed based according to TargetScan

Yes. You can download data in table format (fields separated by tabs) in the download page, so you can use it freely. If you need data not provided in miRIAD, please contact us.

We really appreciate user's feedbacks. If you have questions or want to suggest improvements for miRIAD, please contact us.

How to cite miRIAD?